In order to listen with both ears we need a good sense of balance. This is especially important for musicians because our hearing also influences the sound we make. But a sense of balance must constantly be improved and developed. It is particularly effective when this is combined directly with practice. There are tried and tested helps for this, such as various Ballkissen® cushions, which can be employed in quite different ways when practising alone or for tuition. By everyone! Developing your balance aids successful music making. 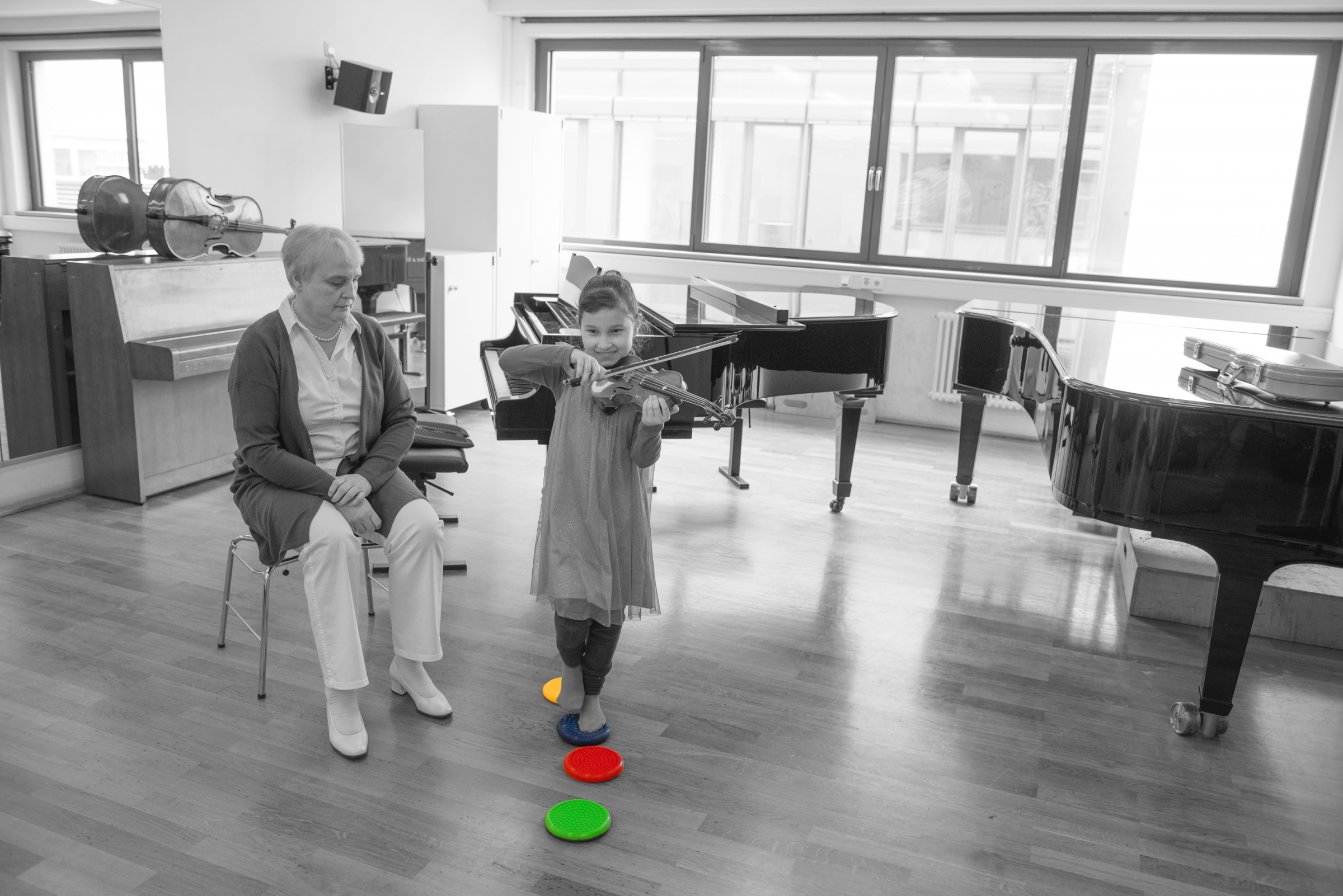 Like child's play: the children stand light and easy on the Mini Ballkissen® Kids cushions and shift their balance from one to the other, with and without their instrument. This is fun for them, and at the same time they train their sense of balance and with that improve their hearing. This activity is accompanied by a host of additional benefits that have a direct impact on violin and viola playing.

But other helpers are also suitable. A studded rubber mat is particularly suitable for people who react sensitively to undulations. At first we didn't even realize how strongly the balance is activated here, until several people told us that it was "shakes" under their feet. The large ball cushions are always a challenge, even for those who are practiced in balance. They can be used to train good body control while practicing. The AeroStep is the "convenient" helper here. You stand on two independent air chambers and can level off while doing so. The mat is - as it does not shake so much - also a very good aid for a good stand >>a good stand<<, although a clear distinction is not possible: the better the balance, the better the standing quality.

Witnessed side effects and benefits

If you "only" activate your balance, you could also do that outdoors in nature and balance on a tree trunk or something similar. Playing the instrument at the same time makes the decisive difference: The body learns to combine "getting better" on the instrument with simultaneous relaxation and activation of balance. In addition, tensing and relaxing the muscles work better. The connection of all these parameters is just as valuable in a qualitative sense (sound change) as in effectiveness (better and more lasting practice results in a shorter time).

It can also be observed that visible tensions in the body such as hunched shoulders, pushed knees, etc., change. Players themselves reflect that it is easier for them to better "influence" their movements consciously. They also reported that they find it easier to focus on the body and the music. Teachers often perceive an improved ability to concentrate.

Different helpers can be used depending on needs, experience, goals of the practicing and personal physical requirements.

The easiest way to consciously start activating your balance while practicing is with the studded rubber mat. The mat is also suitable for very sensitive players because the knobs move very easily. The movement is not perceived directly by everyone. People who do not dare to stand e.g on pillows can also start with this mat. >>More about the mat<<

Small cushions are suitable for children and teenagers with small feet. In the meantime we often hear that adults also like to use them. You can just stand on two cushions - one under each foot - or walk on cushions, which are spread in the room. In the latter case, you should make sure that the distances between the pillows correspond to the body size and leg length, i.e. not too far apart. The cushions are available in two different sizes, 16 cm and 20 cm in diameter. They are also popular with young ensembles because they can also be used to practice musically phrasing. >>More about the cushions<<

You can stand on this air-filled large ball cushion with both feet and thus activate your balance. Depending on its nature, it is more or less dimensionally stable. The less dimensionally stable have the advantage that the process can be felt right up to the tip of the toes. To do this, you simply stand with one leg on the cushion, the foot still touches the ground. The other one is then slowly placed next to the first leg. As soon as you begin to shift the weight of the body onto both legs, the balancing begins with the tips of your toes. >>Learn more about the cushion<<

The Aero-Step is also an air-filled helper. With this training device the balance can be activated "gently".

Having your own set of helpers in your practice room is a huge advantage. Often students also have their own ones for their daily practice at home.

Some helpers can also be obtained directly from >>resoundstrings.com<<.

Visit >>helpers<< and there you find further information about where to get them, also with discount links.