We deal with the question of how to combine learning rhythm and improving and learning instrumental technique in a meaningful way. The starting point is the experience that it is really good if you can tap or clap a rhythm correctly. Unfortunately, this does not yet mean that the rhythm can then also be played correctly with the instrument. Instead of putting the effort into the transfer (e.g. from clapping to playing), we experiment with the question of whether it can't be done at the same time.

The first interim results are available. We have developed an approach that can link rhythm learning and rhythm practice directly to instrumental technique. Erdmute Hohage has drawn on her experience from 2011 and has now systematised the left-hand pizzicato as a practicing technique for violin and viola. In this context, Angelika S. Dietz has experimented with how piano players can proceed to achieve similar effects. Both approaches have in common that direct doing with the instrument is an important focus as well as the activity of the whole body. It was equally important to us that there be direct transferability to pieces, works or passages, so that no separation necessarily has to be made here.

About the approach for violin and viola

By plucking with the fingers of the left hand, coordination between the fingers is established. The basis for this are notated rhythms. The plucking, unlike the left-hand pizzicato as a playing technique, is here in the practice technique a light plucking with less finger pressure. Depending on the performance level, you can choose single-voice, two-voice, three-voice and/or four-voice rhythms for this, with one, two, three and/or four fingers. Here it should be clear that coordination starts from the moment that two parameters are related to each other. Since this would be much too difficult for beginners and the basic coordination of fingers, string and rhythm would have to be established first (at least in many cases), it is already introduced in such a way that at a somewhat later stage, two parameters can be executed more easily independently of each other. Ergo: You start synchronously. Already here, the whole fingerboard is used or can be included. Either by changing positions or by practising separately in different positions, which are shown with four colours in Pizzicato-World violin and viola, the comprehensive exercise book. 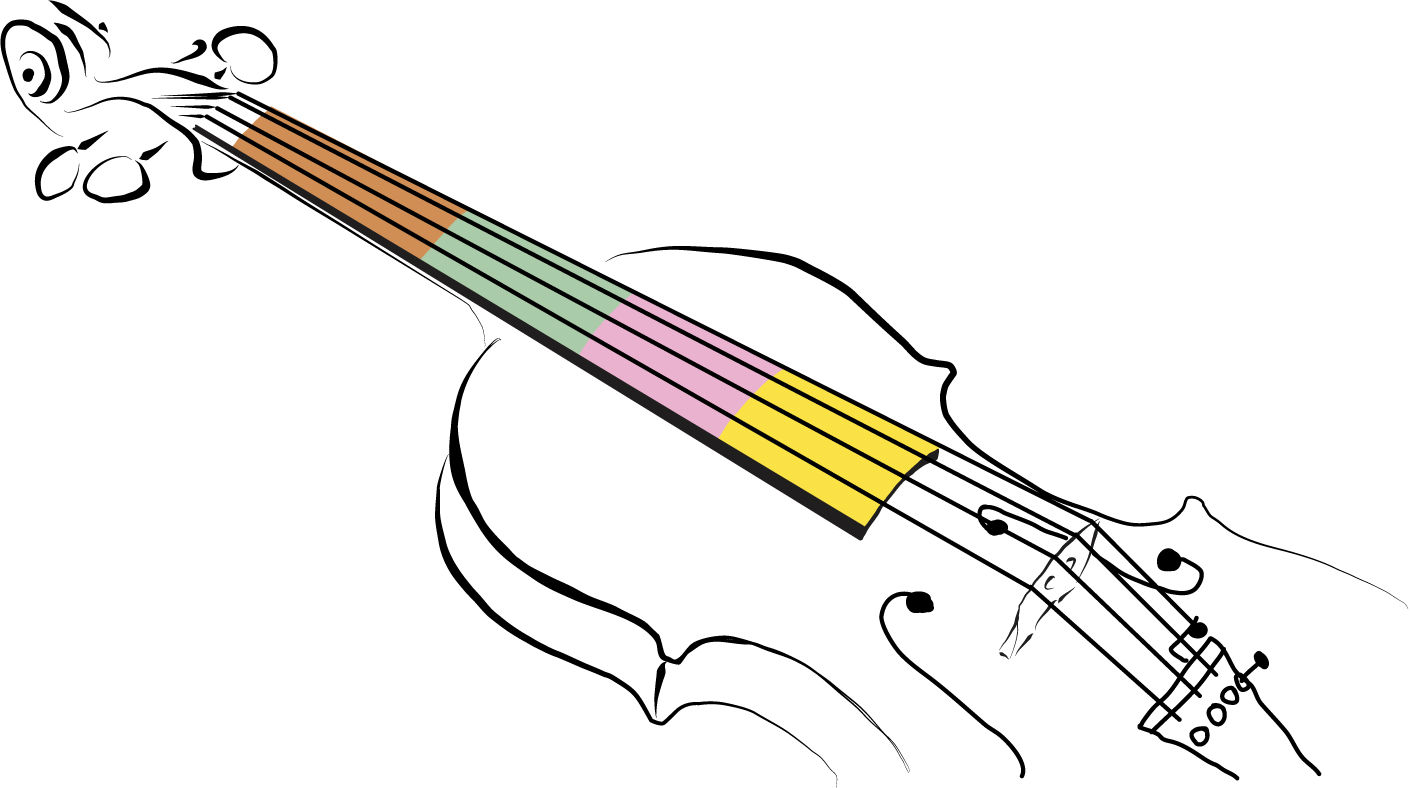 The moment a second independent parameter is added, which is also carried out by oneself, the desired coordination takes place: It is produced by oneself. We do not mean, for example, a metronome against which one now plays, that would be a parameter from outside. The present approach offers different possibilities for daily practice here. Coordination can take place:

How you proceed in detail as a practitioner or teacher is up to you. Pizzicato-World violin and viola offers a systematic structure in a total of 40 exercises that can be used at all levels. The degree of difficulty is not only determined by the choice of parameters to be coordinated, but also by the choice of rhythms. So there are no upper limits in terms of ambition. The booklet offers a small selection of rhythms and links to larger collections via QR codes. However, everyone can use their own rhythms.

The rhythms offered are primarily for systematic improvement. It becomes particularly intensive and effective when the principle is applied to passages that are to be practised, i.e. when a bar, a phrase or the like is taken out and practised in this way.

The fingers of the left hand learn to let go, are strengthened by the pizzicato and by connecting the four positions you also learn the basic movement of changing positions. The most important thing: the fear of changing positions is taken away, the change between the strings is practised on units that are both manageable and challenging. There is no pressure to make the song sound nice and the coordination between right and left is practised as a matter of course, without any demand for intonation, and with a lot of fun. And: The whole body gets the opportunity to be actively involved.

Improve with the left

The collection explicitly shows how to practice scales, how to increase fluency and how to improve string changes based on the left-hand pizzicato as a practice technique. Furthermore, it offers insights into the transfer to the interval technique (intervals as double stops) and the chord technique. Also described in detail is how to make the transition to left-and-pizzicato as a playing technique. To the collection on studioTSNH.de